Over the last forty years, Canadians have revealed the bad old bias in favour of things White, Anglo-Saxon and Protestant as the nasty attitude which it is.  We have struggled to make our country more inclusive. -And that’s a good thing.

We should be preserving things which help us tell the stories of multi-cultural Canada, whether it is the sad experience of Japanese-Canadians during the Second World War or the evolution of the West Indian neighbourhoods of Toronto just yesterday. These are all chapters in the one, great Canadian Story.

-But I observe of late a dimished appetite to explore our earlier history. It is as if there is a national hesitation to recommend elements of our Anglo-Saxon past (unless there is an important First Nations connection, or something to do with the underground railway).

The United Empire Loyalists, the farmer-founders of Ontario (1784), were refugees having found themselves on the loosing side of the American Revolutionary War. Those who came very shortly after the Loyalists were part of an economic migration in search of a better future,  just like emigrants from the third world do today. But those sturdy, eighteenth century agrarian pioneers were White, and Anglo-Saxon and Protestant. 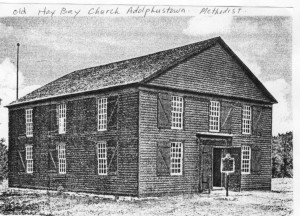 The meeting house which they built on the shores of Hay Bay in 1792  (enlarged in 1835) is still there.   It is a frame building, elegant in its simplicity and expressive of an unpretentious and very personal piety.  It is a reminder that the founders of Ontario were loyal to the Crown, but reserved the right to opt out of the official state religion.  Indeed, they wanted freedom of choice in many things which evolved into a steady pressure to organize and govern themselves, which is at the root of how Ontario is organized and governed today.

The church is respected as a monument by descendants of the original Loyalists who remain in the county of Lennox and Addington.  It has been designated under the Ontario Heritage Act, and recognized as a National Historic Site by the Department of Canadian Heritage (2000)  but without passion.   It is difficult not to believe that the church squeaked through the designation process based on a convenient opportunity to share out the cookies combined with, “Well, we guess so…   It’s really old.”    This site deserves more.

Somehow, we need to overcome our reluctance to eulogize the accomplishments  of settlers who happened to be White, Anglo-Saxon and Protestant.  We need to encourage our educators to continue to teach this history, as part of what Canadians call, “the cultural mosaic”.  To fail to do is a national disservice.  A lack-lustre interest in our Anglo-Saxon pioneers is not contributing to an inclusive Canada.   It is in fact diminishing a very large and signicant part of our cultural heritage.