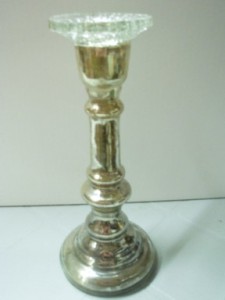 Mercury glass is the descriptive term often used for ninteenth century pieces which consist of two layers of glass with a compound between to make them appear “silvered”.

No records remain from the Herring Glassworks (Napanee) which was in business only for a short time (1881-1883).   Without records, it is difficult to define the output of this factory.  The challenge is greater because it seems that the products had no manufacturer’s mark — or at least none have so far been discovered.
A strong family tradition claims that the above candlestick was purchased from Herring Glass.  It is about 9 1/2″ tall (24.2 cm).   The plug which sealed the base after the silvering was accomplished is, alas, missing, so we do not know what device the Herring craftsmen were using to close the hole.   Local tradition also maintains that Herring was selling mercury glass balls (so-called witches’ balls) which were popular as ornaments.  The question is, were they made at the Works, or did Herring import and re-sell them?

By the 1880’s, domestic lighting was no longer accomplished by candles.   Pieces like this one would have been purchased as decorative objects.  The appearance of silver was a welcome touch of luxury in the rural farmhouse or village church.  Candlesticks were almost always sold in pairs.