The Lives of Ordinary Folks 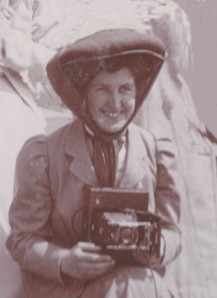 Judith with her camera.

Sometimes during my archival or appraisal work, I stumble on something which seems worthy of a better fate than a cupboard. Such a find was a ‘disbound’ scrapbook which once belonged to Judith Salkeld Robinson. Assembled during the years 1905 to 1914, the book contains Judith’s snapshots of summer rambles and family visits, including a Mediterranean cruise on the new P&O Line. The last two pages concern her marriage to Lieutenant C.A.K. Matterson of the Cheshire Regiment. This took her from Cheshire to Fivehead on the Somerset levels.

With the help of some researchers in the United Kingdom, I have been able to fill in some names and information which take us beyond the few notes left to us in Judith’s careful hand.

Judith Robinson was not a professional photographer. Acidic paper and the passage of a century have also been less than kind to her album. The photographs were sometimes challenging to reproduce.

Do all these intimate survivors of a vanished time really deserve publication? It is never an easy decision. Anyway, it is done. I have chosen to make it available “on-demand” as I expect it will be of special interest to the few, rather than the many. Below, a link to on-demand printing site: